Catherine Clarke recently published The Only Living Lady Parachutist, a novel based on Leila Adair, a woman who jumped from hot air balloons for a living. Here the author shares snippets from Adair’s life as she toured in the Wellington region in the 1890s.

Lovers of the sensational are about to enjoy a delightful shock. There is to be a balloon ascent — probably from the Park Oval on Thursday next — and a lady parachutist is to dart down through the ether and alight swanlike on Mother Earth. This is a fascinating spectacle which has never yet been presented to the residents of this town, and it ought to draw better than a circus.

That’s how the Wairarapa Daily Times1 announced the imminent arrival of The Aerial Queen, Leila Adair, to Masterton in 1894. The Only Living Lady Parachutist, as she called herself, was a remarkable but little-known woman who earned her living by jumping from a hot air balloon with a parachute. 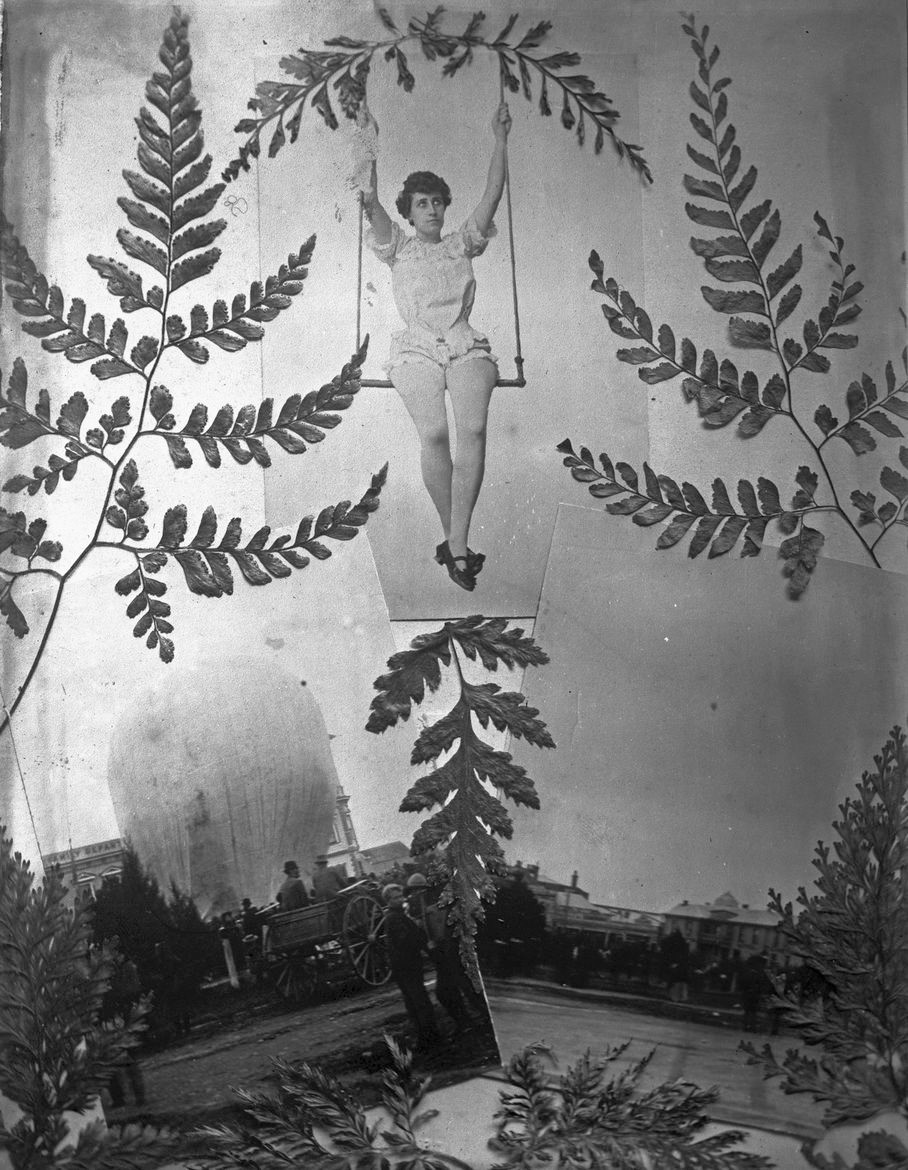 This photo montage was made from pictures taken at a Palmerston North performance in 1894. A few days before this successful ascent Leila had been involved in a stoush with the Manawatu Mounted Rifles, who confiscated her share of the gate takings when the balloon inflation failed and a riotous crowd demanded their money back.

Leila Adair made a balloon ascent in Petone from the A & P Showgrounds that were between Cuba, Ava and South Street. Her new manager, Arthur B. Adair, had a nifty plan, whereby spectators bought the shilling admission ticket as part of the train fare, thereby hoping to avoid “deadheads” who watched the exhibition from outside the grounds for free. Unfortunately, this plan ran into unforeseen problems when the inflation took longer than anticipated, forcing Leila to make a brief hurried ascent before the return train departed. 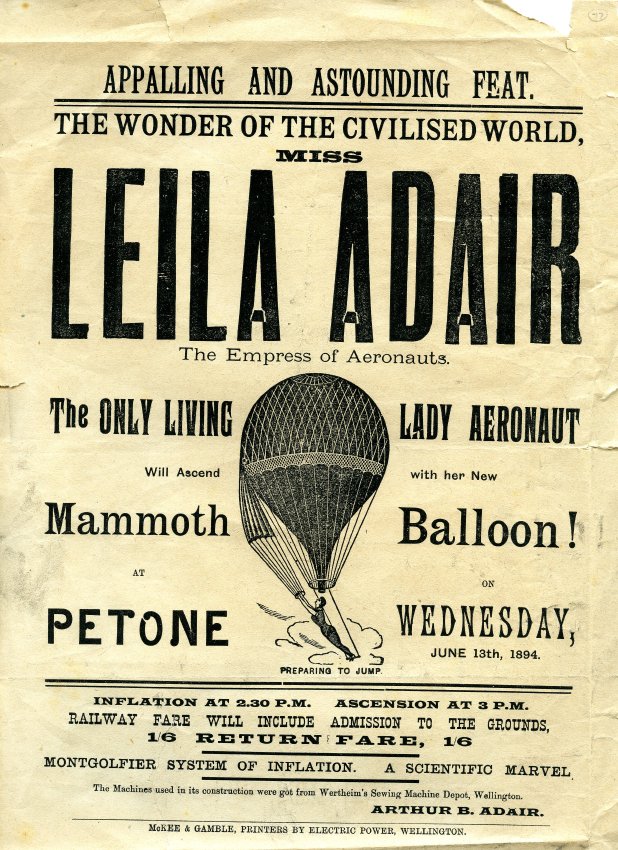 About 800 or 1000 people assembled yesterday at the Show Grounds, Petone, to witness the balloon ascent of Miss Leila Adair. Considerable difficulty was experienced in inflating the balloon, but about 4 pm, all being ready, Miss Adair attired in striking costume and wearing a lifebelt, took her seat on the trapeze bar fixed to the parachute, which in turn was connected with the throat of the balloon. When the guy-ropes were let go the balloon rose about 500 feet, travelled in a south-west direction for about a minute and a half, and then began to descend. Miss Adair at this time was swinging by her hands from the trapeze bar, and although the parachute opened with the descent, it failed to become disengaged from the balloon. After passing Cuba-street and the adjoining paddock, Miss Adair, when about 12 or 15 feet from the ground, let go and landed safely. The balloon being relieved of her weight, again rose for a short distance, and eventually landed on the beach… A narrow escape from serious accident took place just before the ascent was made. Long scaffold poles were used to take the weight of the balloon during its inflation, and one of these being lowered rather carelessly, fell over the rails in front of the stand. The fence was damaged, and the pole broken in two with the shock. A woman and young child just escaped being struck by the falling pole.

After her Petone ascent, the Public Works Committee recommended to the Wellington City Council that Leila Adair could have use of the Basin Reserve for her balloon ascent for a fee of £20 with an extra £20 bond to cover any damage. The Wellington Cricket Association3 made strenuous objections – they’d already spent £100 preparing the ground for next season, it would put all the work back and result in “a most disastrous financial loss” — so the Council reversed their decision.

Arthur B. Adair then wrote the following letter to the Town Clerk on 18 June 1894.4

Having received a large number of requests from many leading citizens of Wellington who saw our balloon ascension last Wed to give another show here, Miss Adair has consented to give another performance and also to do the marvellous parachute drop in addition.

I have been looking at the various grounds in and about the city and have fixed on Newtown Park as being the most convenient and appropriate for an ascension and am now writing to you to see if your council could let me have the park for the show next Saturday afternoon. Although we take up very little room for the purpose of inflation, I would be willing to find sufficient security to compensate you in the event of any damage being done to your grounds by my workmen.

A balloon ascension has never been seen in Wellington and a parachute drop is a rarity in any part of the world, but Miss Leila Adair proposes to do both of these feats, if my suggestion meet with your sanction. As this is a large city and will want a lot of advertising, I should be very much obliged if you could let me have your answer either tonight or tomorrow morning at the latest.

Hoping to receive a favourable reply

I remain yours faithfully 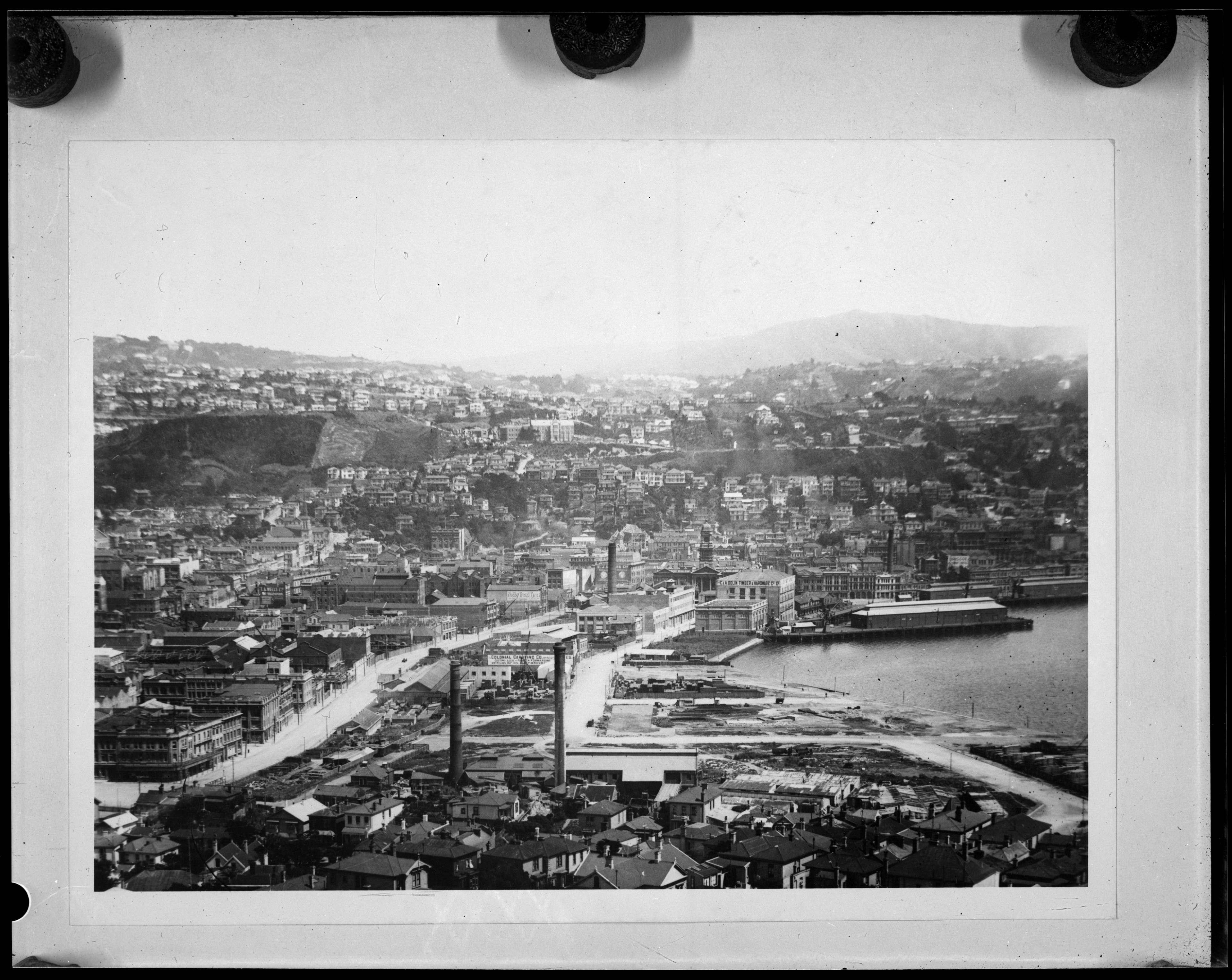 The Mayor came up with a last-minute alternative and instructed the council to grant permission for Leila to use the Corporation Drainage Yard instead. Presumably either the proposed site (near where rubbish was incinerated in the Destructor, now Waitangi Park) or the weather was not in Leila Adair’s favour, as two weeks later she sailed for Blenheim without making another ascent in Wellington.